Never doubt that a small group of thoughtful, committed citizens can change the world; indeed, it’s the only thing that ever has.
— Margaret Mead 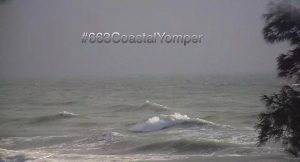 Ask anyone what their mental image is for Florida, and most will conjure a beach scene complete with palm trees and some gentle turquoise waves, despite relentless marketing by less nature-focused Florida attractions.

Florida has #663 miles (#663CoastalYomper) of coastline and would be called The Ocean State if Rhode Island hadn’t somehow managed to snap up that moniker. Still, when people think beaches, they think Florida, and with good reason: Florida’s 663 miles of world-class beaches welcome the sun on the east coast each morning and bid it farewell on the west — to applause. It’s 663 miles of opportunity for individuals and families to connect with the natural world and start a relationship with it.

We hope you’ll use the #663CoastalYomper as a reminder and an inspiration to do what you can whenever you can to help the environment in general and the oceans and shore in particular. The next opportunity to do that is April 22, Earth Day, when people come together to let their voices be heard. You can and will make a difference. No one was more surprised than us at our early successes trying to reach the masses and the policymakers. You can do that too.

Because we love Florida’s beaches, we aren’t in denial about the myriad threats they face. Nutrient runoff from development, agriculture, and even the guy down the street fertilizing his lawn threatens nearshore waters with red tide. And that’s just locally. On a continental scale, fertilizer runoff from farms from the continental divide and east empty into the Gulf of Mexico, causing a Dead Zone. The reduction in mangrove cover leaves the state more vulnerable to storm surge from hurricanes. Depleted fish stocks threaten ocean health globally, and humanity’s use of the oceans as a dumping ground can’t continue.

So we urge you to do what you can, including getting involved in Earth Day. Have a conversation with others about environmental sustainability. Clean up after yourself when outdoors. Work at the neighborhood level and with local and state officials to bring the policy changes that will make a difference. Whatever your ability, we’d ask that you make the effort for yourself and for future generations.

What we know is there are 663 reasons to get involved at whatever level you can. We encourage you to reach out to ocean and beach advocacy groups like Surfrider Foundation (LINK) or local groups like Sarasota Bay Foundation, NEST and other local programs.

Look for our other Coastal Yomp #630CoastalYomper to look for even more inspiration to continually yomp the coastal miles from one coast to the — on either side of the Atlantic.