The devastating effects of plastics on our environment continue to generate news headlines.

Allard PPC founder Ross has found algae-free clear waters on his #coastalyomping trek through Europe. But in ports along the way, he also documented flotsam and jetsam in ports, disappointing reminders of the need to do more to protect our oceans and sealife.

–In Southwest Florida, a dead dolphin that washed up on Fort Myers Beach was found to have ingested a plastic shower hose.

–The Center for Biological Diversity calls plastics in our oceans a “global crisis.” Plastic makes up 40 percent of the world’s ocean surfaces, and at current rates plastic is expected to outweigh all the fish in the seas by 2050.

— Oceana reports “an estimated 17.6 billion pounds of plastic leaks into the marine environment from land-based sources every year—this is roughly equivalent to dumping a garbage truck full of plastic into the oceans every minute.”

— And Vice reports that only 9 percent of the world’s plastics scrap is being recycled, as many Asian countries are refusing shipments. As a result, plastic scrap is piling up and recycling has gotten more expensive.

But there are also signs of hope, evidence that people, governments, organizations and businesses working together can have a demonstrable impact on saving our oceans.

— Vox reports that a new bacterium has shown promise by developing an appetite for plastic waste. “The bacterium had figured out how to do something that humans have struggled to do for decades. Ideonella sakaiensis could break PET down and use the plastic for energy.”

–In Vietnam, a company is manufacturing biodegradable straws from compostable wild grass. The fast-growing edge grass that has a hollow stem and grows wild along the deltas.

–In Sarasota County, the first Water Quality Summit from 1 to 6:30 p.m. June 5 at Riverview High School will bring experts from science, government and the public together to address algae, pollution and other issues affecting the Gulf of Mexico and its estuaries. 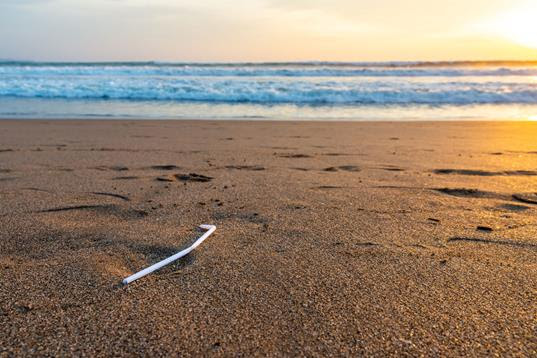 — And in the United Kingdom, Surfers Against Sewage was successful in getting plastic straws, stirrers and ear buds banned in England. Politicians acted after a grass-roots effort brought attention to the problem plaguing the world’s ocean. Sign the SAS petition to keep efforts to protect our oceans going: HERE

How are you telling your story? Contact us at Allard PPC.