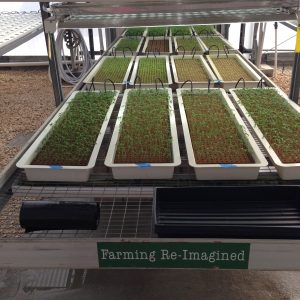 People often look at a rising superstar and say it’s a case of “overnight success.” But anyone who pays attention to these things knows that almost always there are years, sometimes decades, of work that go into the “overnight.”

It’s just that no one was watching during that time.

At Allard PPC and VRA Associates we are seeing this happen in the form of a global environmental stewardship ethic that is gaining ground at an astounding rate.

But anyone who was paying attention could see this coming.

The first Earth Day was April 22, 1970 — almost a half century ago. People were fighting for change back then and even before that (consider that Rachel Carson’s “Silent Spring” was published almost a decade earlier).

But, because so many people and organizations were committed to creating a seismic shift in human thinking, we have this rapidly growing global movement of today.

We are proud to say that we at Allard PPC and VRA Associates are among that group. Both companies have been members of Sarasota County’s Green Business Partnership for more than a decade.

But we are not alone in these efforts. Working as well toward a more sustainable future are many of our clients, collaborators and friends — organizations such as ECHO, the environmental and poverty fighting powerhouse just a few miles south of us. So too is 3 Boys Farm, Dakin Dairy and previous client Hyatt, a company that is taking on a changing hospitality workplace in innovative and thoughtful ways.

While we strongly believe that doing good is its own reward, there’s no denying that those rewards are compounded by the strongly positive public image that naturally follows. We all know that a positive public image creates customer loyalty. And the bias for consumers is to buy from companies they like — even to the point where they’ll pay more when they have such feelings for a company.

This is not news, but we want to share the stats to back it up. In 2015, the Nielsen Company, in a global survey, found that almost 70 percent of consumers say they are willing to pay more for sustainable brands. That’s up 55 percent from the previous year. Additionally, 84 percent of consumers seek out responsible products whenever possible and even switch to brands associated with a good cause when price and quality are similar. LINK

Consider as well that this type of consumer behavior is so common that there’s an app for it. Buycott touts itself as a way to “Vote with your wallet.” Consumers can scan a UPC or QR code and find out the ethics of a company or product they are considering.

So it boils down to this: People want to do good. And they want the companies they do business with to embrace those values. We like that, but it’s not why we strive to do the right thing at all times. We selfishly believe that doing the right thing makes the world better for us and the people we love.

Talk to us today about our ethics as a company about how we conduct ourselves in the marketing arena and how we can help you take your company to the next level in a way that is sustainable and likely to have the greatest impact on your success while making the world a better place for everyone.

prev post
We're Thrilled to See a Growing Health, Wellness and Environmental Consciousness
next post
Common Sense is the Beginning of Good Cybersecurity