Sustainability is Good for the Planet and the Bottom Line 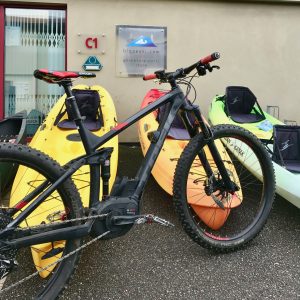 England’s South West Coastal Path has been front and center for us here at Allard PPC and VRA Associates, with our founder Ross Allard, returning home recently to hike the coastal path and bike nearby trails while trying to raise awareness of the environmental issues facing this beautiful stretch of coast.

It’s worth saving for many reasons, not the least of which are its intrinsic beauty and special place in the hearts of locals. But on a more pragmatic level, such natural wonders are worth saving for their role as powerful economic generators.

The South West Coast draws many thousands of visitors each year from around the world. That’s a win locally for businesses such as Big Peaks, an e-bike retailer, bringing an infusion of tourism cash into the local economy and creating jobs and business opportunities. But it’s an even bigger win in terms of promoting preservation of the natural world.

Our friends at Big Peaks have a deep love for the natural environment around them, particularly Dartmoor National Park, and they’ve worked to share that love through innovative and affordable e-bike tours.

Bigpeaks.com is the leading e-bikes company in the South West of the United Kingdom, and the company has earned its eco credentials, its nature cred if you will, by walking the walk or in their case biking the bike path. The store, located in the pretty town of Ashburton, is situated right on the edge of the Dartmoor National Park.

Owner Paul Tomlin says the area, beautiful as it is, is not unaffected by a changing environment, particularly global warming. This part of the UK has experienced some climate change phenomena, with the summers being split into two periods — hotter early summers and cooler late summers.

As well, says Tomlin, “there is some coastal erosion which has been accelerated by the storms we have had in the last couple of years, presumably by the change in the Gulf Stream and the Polar Ice Melt. Coastal footpaths have been ruined somewhat, but I am pleased to say that they have now been rebuilt.”

The low impact e-bike tours by Big Peaks let visitors in every stage of life and physical fitness experience the beauty of nature first hand. This is a proven way to get people on board for conservation efforts, and that’s another win for tourists, the local economy and the environment.

“We have national cycling routes going right past our door and we have many ride links right from our door to the heart of the Dartmoor National Park,” Tomlin said.

Of course, such great adventures aren’t without their challenges, some of them having nothing to do with the actual out-of-doors. E-bikes for instance have batteries that are considered hazardous materials, which is not a problem for riders or even the natural environment when the bikes are in use. It’s more a difficulty in shipping the bikes overseas when owners want to take them along. This is easily sidestepped by renting bikes at your destination from places like Big Peaks or dealing with a company well-versed in the intricacies of shipping such items.

On a side note, just such issues led to Allard PPC and VRA Associates is seeking the correct certifications for our shipping needs, though for us, it’s all about effectively and efficiently shipping promotional products globally.

It’s a globe the whole team at Allard and VRA want to protect, selfishly on one level, because we haven’t seen it all. We also think it’s the only way to move into the future with a clear head about what we do and how we do it.

Talk to us today about any of our green, philanthropic or other socially conscious endeavors and, of course, how we can help your company reach new levels — and new customers — in efficient, effective and sustainable ways.

prev post
The Key to Conservation is Nurturing a Love for the Natural World
next post
We're Thrilled to See a Growing Health, Wellness and Environmental Consciousness